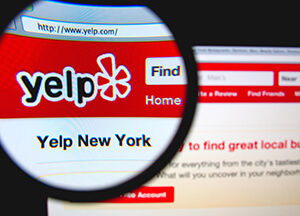 The question has been raised many times before: Do small business owners have a right to have positive reviews appear on their Yelp page? According to a recent federal appeals court ruling, the answer is no. The case, which was brought by small business owners claiming that Yelp extorted advertising payments from them to manipulate reviews on the site, was thrown out by a judge on Thursday.

Many small business owners have alleged that Yelp salespeople use hard-ball tactics to push advertising, which includes the removal of positive reviews from business listing if owners refuse to purchases said ads. Yelp claims it does not practice such methods and that its system for filtering reviews is automated.

The most noteworthy aspect of the ruling is that even if small business owners could prove that Yelp manipulates their pages to influence them to pay for advertising that does not mean they’re being extorted or that Yelp is in violation of federal.

A business claiming “economic extortion”, such as a Bay Area dentist who had claimed that Yelp extorted her by removing positive reviews from her page, must show that the defendant “had no right to seek payment for the service offered,” according to the ruling by Judge Marsha S. Berzon. But the law does not require that Yelp publish positive reviews.

“By withholding the benefit of those positive reviews,” Judge Berzon wrote, “Yelp is withholding a benefit that Yelp makes possible and maintains. It has no obligation to do so, however.”

The question for Yelp users then becomes whether or not to trust Yelp’s ratings if they are in fact manipulating businesses to pay for advertising in order to display positive reviews. Yelp continues to argue that such allegations are unfounded. “For years, fringe commentators have accused Yelp of altering business ratings for money,” wrote Yelp’s Senior Director of Litigation in a blog post. “Yelp has never done this and individuals making such claims are misinformed, or more typically, have an axe to grind.”

Whether or not Yelp has actually manipulated its presentation of reviews is still undetermined. That is apparently grounds for yet another lawsuit.