The Newly-Approved SMILE Procedure: Does LASIK Have a Rival? 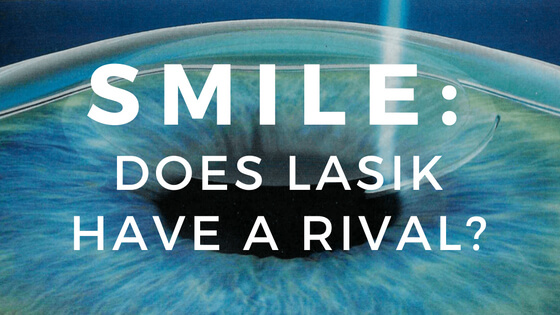 In September of 2016, the VisuMax® Small Incision Lenticule Extraction procedure (SMILE) from Zeiss was approved in the United States.

The SMILE procedure is thought by many to be an upcoming rival to LASIK surgery. While, yes, there are many similarities, some aren’t so quick to admit that LASIK may be in for some competition. Since the SMILE procedure is just being introduced in the U.S., LASIK remains the vision correction frontrunner.

LASIK VS. SMILE – WHAT’S THE DIFFERENCE?

SMILE’s primary difference from LASIK is that it does not require the creation of a corneal flap to reshape the eye. This means that the SMILE procedure will be very beneficial to patients who lead active lifestyles, as it will eliminate the risk of flap complications should the eye be struck.

The SMILE procedure is also unique in that it only requires the use of a femtosecond laser, unlike LASIK which requires both a femtosecond laser and an excimer laser. This creates simplicity and less risk for complication, while still providing great outcomes. The SMILE procedure has been proven to have milder dry eye side-effects, which is a common problem after LASIK.

A LONG ROAD TO APPROVAL

The commencement of this procedure outside of the United States began in 2007. The SMILE procedure has seen success in Europe, China and India since then. Approval in the United States was long awaited by many ophthalmologists since clinical trials began in 2012. To date, 255 patients have been treated at five different facilities in the U.S.

Many would argue that with the advent of the SMILE procedure, it’s only a matter of time before LASIK surgery is put on the backburner. Others would say that while the SMILE procedure may have benefits, it doesn’t match up to LASIK quite yet. What do you think?

Schedule Your Free Marketing Assessment Today - as simple or in depth as you need.